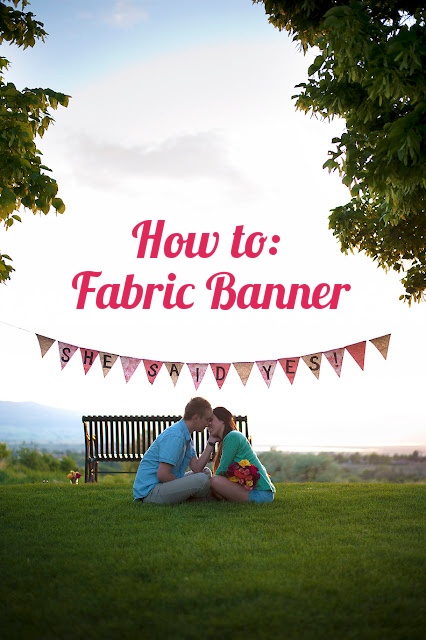 Some exciting occurrences have been happening in my family life one of which being that my little brother Cameron proposed to the lovely Kumiko on Sunday and they will be getting married in August! I am so excited. So, since he was going to propose I enlisted myself to make a fabric banner that could be hanging up in the general area for a little extra “pretty.” Kumi’s sister Mari happens to be a photographer, so while I decorated, she got her camera ready, and when the time came we dove into the bushes to watch the magical moment! The above is my favorite shot Mari took of the banner after she did indeed say yes. Check out more of Mari’s amazing photos at Mariko Kay Photography. You will love them. So now on to making the fabric banner:

Fabric- as many different ones as you want. To give you an idea of how much you will need 1/2 yard will make you 20 individual triangles which means ten flags total.
Fabric Scissors or Cutter
Ruler or Cutting board
Sewing Machine
Iron
Twine or string

I chose three different fabrics to use for the pennant flags on the banner. My mom did the sewing on this while I worked on cutting out the letters. She cut them into triangles 7″ across the top and 9″ on each side. Then put the “right” sides together, facing each other (the right sides being which ones you want to be facing OUT when it is all done) and sewed across the top at 1/4 inch. After that she took them all over to the ironing board and ironed them out- if you look in the third picture above the sewed together parts are sticking up. She ironed down the middle of that seam so that each was pressed down to its respective side. This makes it easier to fold over so that the flag is now sewn together at the top and the “right” sides are facing out.

Then she took them back to the sewing machine and sewed the sides together with 1/4 inch seam again. She started about half an inch below the top as you can see in the middle picture above.  This extra space is so that you can string twine through them. Ta-da. The flags were done. We ironed them again so they looked nice. Meanwhile, I found a font I liked on the computer, printed out a few different test sizes and compared them to see which one would look best on the banner. I wanted it to say “SHE SAID YES!” on one side and “KUMI + CAM” on the other. I ended up using the font KaiTi in size 450. I printed out the letters and cut them out each individually, laying them on the navy fabric and pinned them in place so that I could then cut them out of the fabric. I realized afterward that I didn’t need to cut out the paper letters first. I could have just pinned the whole piece of paper to the fabric and only cut out the letters once instead of twice! You live- you learn, right? 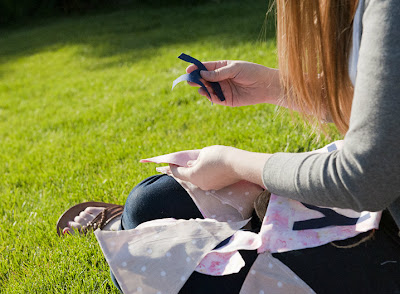 Once the letters were all cut out I used permanent double-sided tape to stick the letters on with. They stayed on well, and it is nice that they can come off easily too so the banner can be used for something else later on.

Here are a few of my phone pics from the set-up and after it happened. So cute! I love how it turned out. 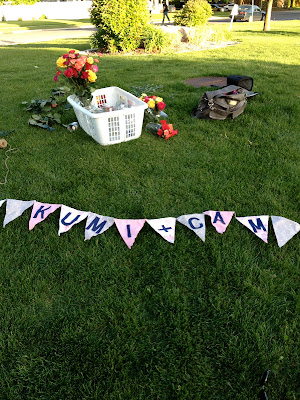 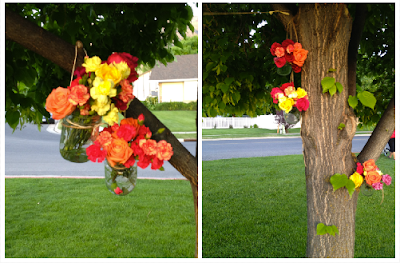 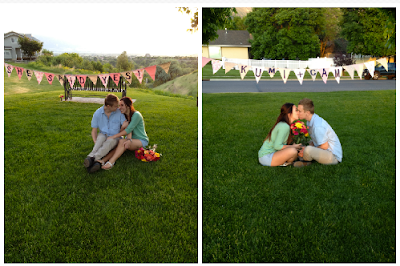 Also, I am guest-posting over at The Budget Maven today. Make sure to go check it out, and take a looksy around her blog. She’s a great writer! 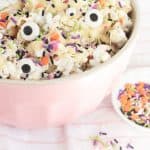 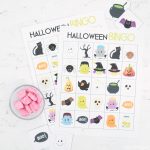 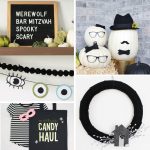 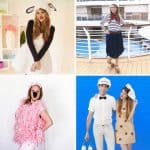 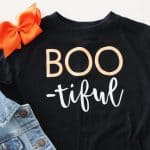 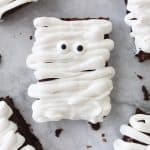